An unexpected breech baby could have had the potential to cause panic and fear and a caesarean birth but this determined first time mum used her hypnobirthing techniques to choose a vaginal breech birth with just gas and air! And during the COVID-19 pandemic! 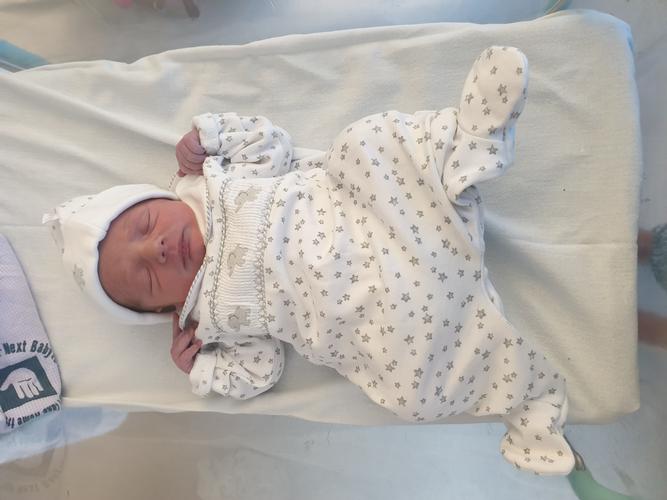 On Saturday 8th August (37 weeks and 5 days pregnant) I had a busy day and went to my friends house in the evening. Since the Monday before, I had felt the bump move down which I thought was the head becoming engaged. I had quite an easy pregnancy, with no sickness and the only real annoying thing was heartburn so I could notice the difference in feeling strange.

I got home on the Saturday after visiting my friends around 8pm and then went to bed around 10pm as I had a bit of stomach pains. Then for the next few hours my stomach was still hurting and after about 4 hours of it starting, I realised that there was a pattern. I tried to ignore it was happening as I was not fully finished with the things I wanted to complete before the birth (silly really), but alternated between having a bath and bouncing on the exercise ball to relieve the pain. I am quite proud of how calm I kept and chose not to wake Tom until later as I wanted him to not be tired if it was going to be a long labour. I used a lot of the breathing techniques and things you had taught us during hypnobirthing which helped keep me calm and focussed from 10pm - 3am. I then called the labour line at QA Hospital as I didn't really know the procedure and they said to wait until the contractions were 3 in 5 minutes and took my breath away.

I managed to stay calm with the alternation between a bath and the ball and it was around 5am when the contractions were around 40 seconds long and coming every 1 min, they were at this point getting more and more unbearable. I called my Mum to come and pick up Rufus (our dog) and called the labour line again. They said to come in so we got to the hospital at 6.45am, at which point my waters broke as soon as I got out of the car (luckily not in the car). From around 6am the contractions were getting really intense but I still tried to stay focussed as I knew they would pass.

We got the maternity led unit and Tom had to wait outside in the corridor as he was only allowed in when I was in established labour.

I went into a room and tried to focus during contractions....I think they were easier to manage because I knew they would pass, saying that they still weren't pleasant. I thought because I am quite a 'get on with it, and it'll be fine' kind of person, I had thought it would be a breeze, but they were awful! But saying that the breathing techniques and staying calm and focussed while I was having the contractions definitely helped!

I was examined by a student nurse who asked the midwife to double check what she had found (which was procedure) and they told me 'did you realise the baby was breech', which I didn't. He was breech at my midwife appointment at 32 weeks but had turned by the 34 and 36 week check. They also confirmed that I was 6cm and I relaxed (as much as you can), as I knew 1. Tom could come in, and 2. I wouldn't be sent home.

It was at this point that they said I was need to be wheeled through to the labour ward to have a scan. Once there I went into a huge room which was private, had it's own bathroom and I actually quite liked it! Also, Tom joined at this point...as did gas and air!

They did a scan and confirmed the baby was breech and I immediately thought that meant I would need a caesarean. A consultant came in and explained that I need to choose whether to have the baby naturally (which they would not recommend) or a caesarean. She gave me a bit of time to think about it and after she left the room the midwife (who was so nice throughout) said to me 'you don't need a caesarean, you can do it'. I asked Tom what he thought and he said it was up to me and I chose to try naturally. I was prepped for surgery anyway should things go wrong. I went from 6cm to 8cm within an hour so things were progressing quite quickly. The consultant totally respected my decision and the whole team in there were so encouraging throughout labour.

The contractions were getting worse and worse and Tom had got out my laminated affirmation cards and started reading them to me. I did say to him a few times to just do the caesarean or to let me have an epidural, but he encouraged me a lot as I think he knew how disappointed I would have been as I hate giving up on things! I tried the breathing techniques as much as I could along with gas and air.

After around another hour I heard the consultant say to the midwife that she would come back and check in 45 mins. I saw someone come in with the baby cot and around 4 people entered the room and I relaxed a bit at this point as I knew they would only be in the room if the baby was coming soon.

So they then asked me to push, which wasn't too bad as it was a relief from the contractions as I could push the pain down into them. I would say I pushed for about 15-20 mins before the baby came out.

The baby then came out and was immediately put on me. I think I was in shock at this point as it was all very surreal. We had skin to skin for around half an hour while they were finishing on me and then went to Tom. It was lovely to see him with our baby!

After everything was cleaned up and maybe because it was a Sunday and quiet, we were left alone in the same room all day. This had such a huge positive effect on the birth as having to go on a ward and Tom go home maybe might have made me thing differently.

We had arrived at QA at 6.45am and Max was born at 10.16am so all in all a quick labour. I do think I was slowly in labour the whole week as I hadn't felt right and the head was obviously not engaged as his head was at the top!

I would say, although it did not go to plan, I had a positive birth experience. I love a challenge and I guess I feel a sense of accomplishment that I managed to do it. I definitely wouldn't have been so calm if it wasn't for Tom encouraging me and the focus I tried to keep throughout. After discussing the pain relief options with you, I am glad I didn't end up having an epidural or anything else other than gas an air. It was so encouraging doing your hypnobirthing course as I felt I had a lot more knowledge of the process, of what was going on and how to manage it. The balloon video you showed us has always given me a much better understanding of the dilation and contraction side of things.

Thank you so much for providing us with the hypnobirthing course and your knowledge, I am unsure if the birth would have been so positive without it!

Your E-mail has been sent. We will be in contact with you soon.

Please refresh the page and re-submit the form.

SORRY
Your content caused an error and your email has not been sent.
Please remove any unusual characters and try again